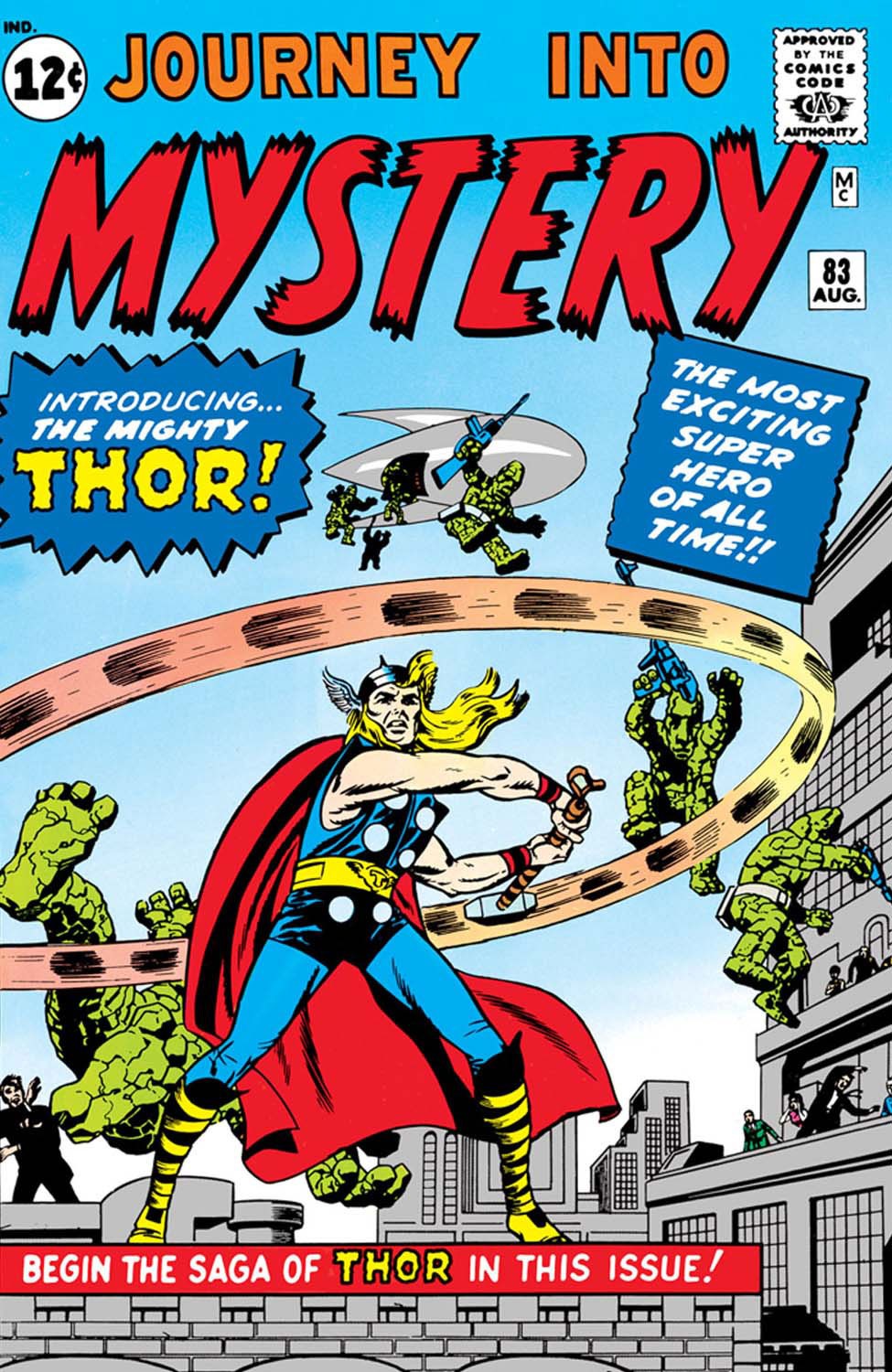 Comic books, that is, artwork set alongside text, published in sequential form to tell a story, have been around as an artform for a while, going on almost two hundred years. They weren’t always about superheroes – the earliest American comics were tales of romance and comedy. As publication methods became more favorable for the medium in the early 20th century, the magazine-style pulp comic took off, and all sorts of genres along with it, particularly westerns, science fiction comics, crime comics, and more. Early characters from this era included Popeye, The Shadow, and The Phantom.

And then came Superman. And the Golden Age of Comics was all about superheroes like Superman, and the era bore witness to Batman, Wonder Woman, Captain America, Captain Marvel (now known as Shazam), the Green Arrow, and more. This first wave of superheroes was full of larger than life characters, mostly superpowered, who performed amazing feats of strength and skill, and who protected the innocent from the ill-intentioned.

After World War II, superheroes waned in popularity somewhat, and other genres of comic found their way back into the spotlight. Superheroes were still published, and many were still successful, but they didn’t dominate the market the way they had in the early 40s.

And in the 50s, the comics market was changed forever by the Comics Code Authority. Following the publication of the book Seduction of the Innocent by Fredric Wertham, and a series of hearings in the US Senate, the Comics Code was an agreement by the major comics publishers to censor their own works. Rather than risk the outrage of the public for various kinds of indecency, they would have each comic meet a series of standards, have the scripts and the finished products reviewed, and then have a logo put on their works to show parents that their works were “safe” for children.

Of course, this dramatically changed the kinds of stories that comics told. Horror stories, crime stories, and war stories were suddenly much more difficult to get approved. Superheroes were much safer, but even superheroes had to tell certain kinds of stories – it was much more difficult to tell realistic crime stories, previously the bread and butter of heroes like Batman and the Green Arrow.

Martin Goodman had founded Timely Publications in 1939, and along the way published a variety of comics in a variety of genres, with varying success, including among them Namor the Sub-Mariner and Captain America, extremely popular characters. Most of the day-to-day editorial functioning of Timely was run by Goodman’s wife’s cousin, Stanley Lieber, who edited or wrote many of the comics. For the most part, Timely followed the market, including the whims of the Comics Code Authority, through the late 50s and into the early 60s, but after superheroes fell out of favor following the end of WWII, Timely mostly kept to other genres of comics.

Goodman and Lieber (who published pseudonymously as Stan Lee) had a conversation after the publication of DC’s first Justice League of America comics, though, about how Timely, which had just started to use the name Marvel Comics more frequently, might expand into superheroes.

Publication started with the Fantastic Four, a team of heroes with crazy science fiction based powers. But the draw wasn’t just the heroes, or their powers. The Fantastic Four was a kind of family, with everything that implies, grudges, arguments, reconciliations, and clashing egos. That was Stan Lee’s concept of the modern superhero – not a symbol of good and wonder, but people, who wanted to be good, but who had to struggle to accomplish it as well.

After the successful publication of what would prove to be his most popular character, the Spider-Man, Lee set himself a new task: combine the “contemporary mythology” of the new Marvel superheroes with the ancient mythology of the Norse gods. Of course, Lee was already doing most of the writing for the comics in publication, including the Fantastic Four, Ant Man, Spider-Man, Incredible Hulk, and others. But he knew the artist needed to be the inimitable Jack Kirby, the legend who had co-created Captain America, and whose style was larger than life, already on the right scale for a project involving gods. And so Stan got his brother Larry Lieber to do the regular script work for the book.

Then Thor the Thunder God became a superhero of the modern age!

Thor was the obvious choice to turn ancient mythology into modern mythology. As I’ve discussed previously, Thor’s role as the protector of humanity makes him a kind of proto-superhero already. With Lee and Kirby’s innovation of the inscription on Mjolnir, making Thor’s worthiness to wield Mjolnir a firm check on his powers where gods typically have no such limitations, suddenly such power could be realized on a human scale. And with the further use of the alter ego of physician Donald Blake, a disabled man who still was both intelligent and quite able to contribute to society on his own, the comic was able to explore Thor’s power through a man who initially didn’t fully understand the Norse mythology, or the abilities of Thor’s hammer.

The story in Journey Into Mystery #83, that first issue, is fairly straightforward.

Rock monsters from Saturn invade Earth! They establish a beachhead at a site in Norway!

Mild-mannered physician Donald Blake, on vacation, stumbles upon them, and flees into a nearby cave!

He finds a gnarled ancient stick, and when he taps it against the wall of the cave, something amazing happens – he is transformed into The Mighty Thor! 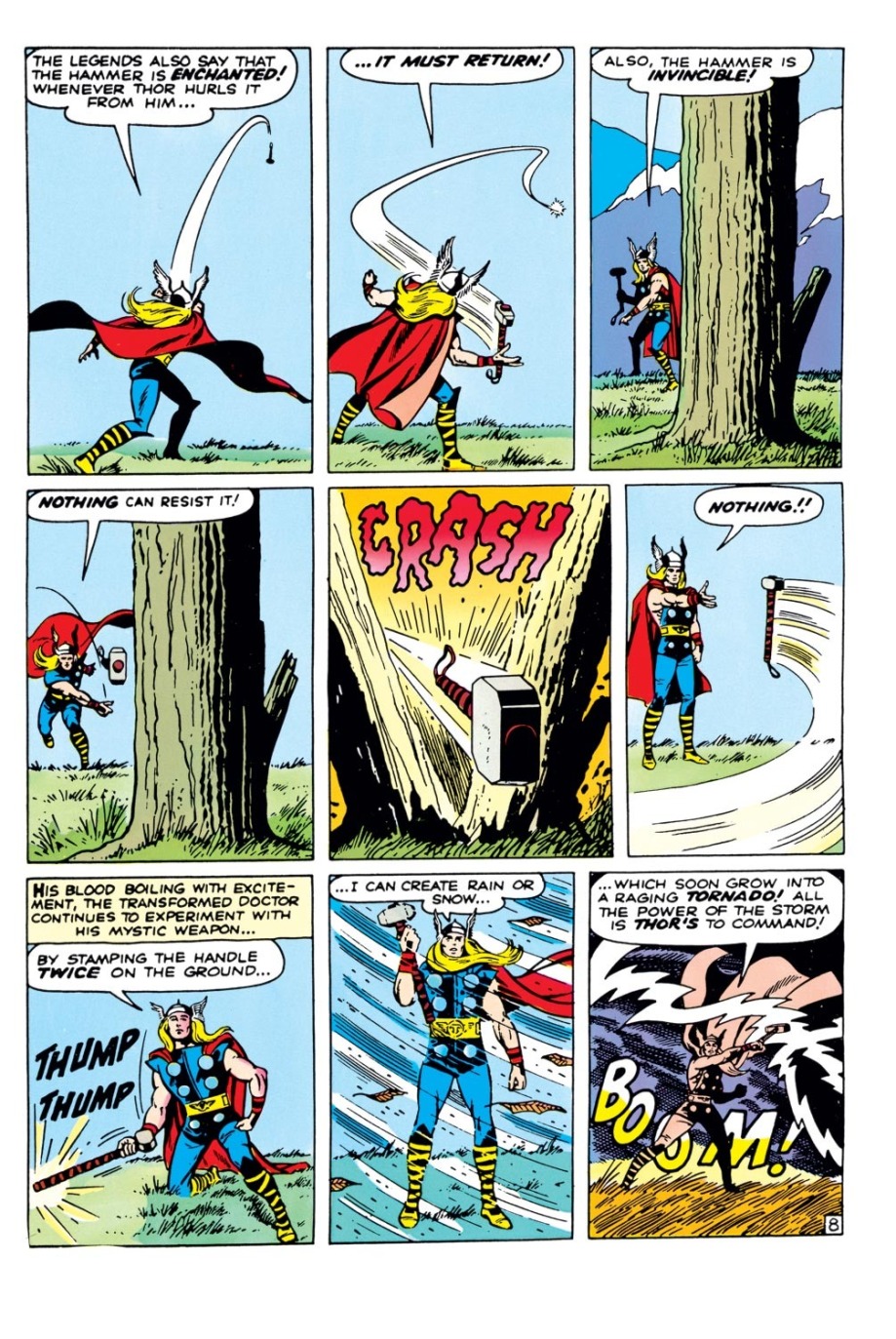 He then faces the rock monsters from Saturn, destroy their mechano-monster, and they flee in terror! 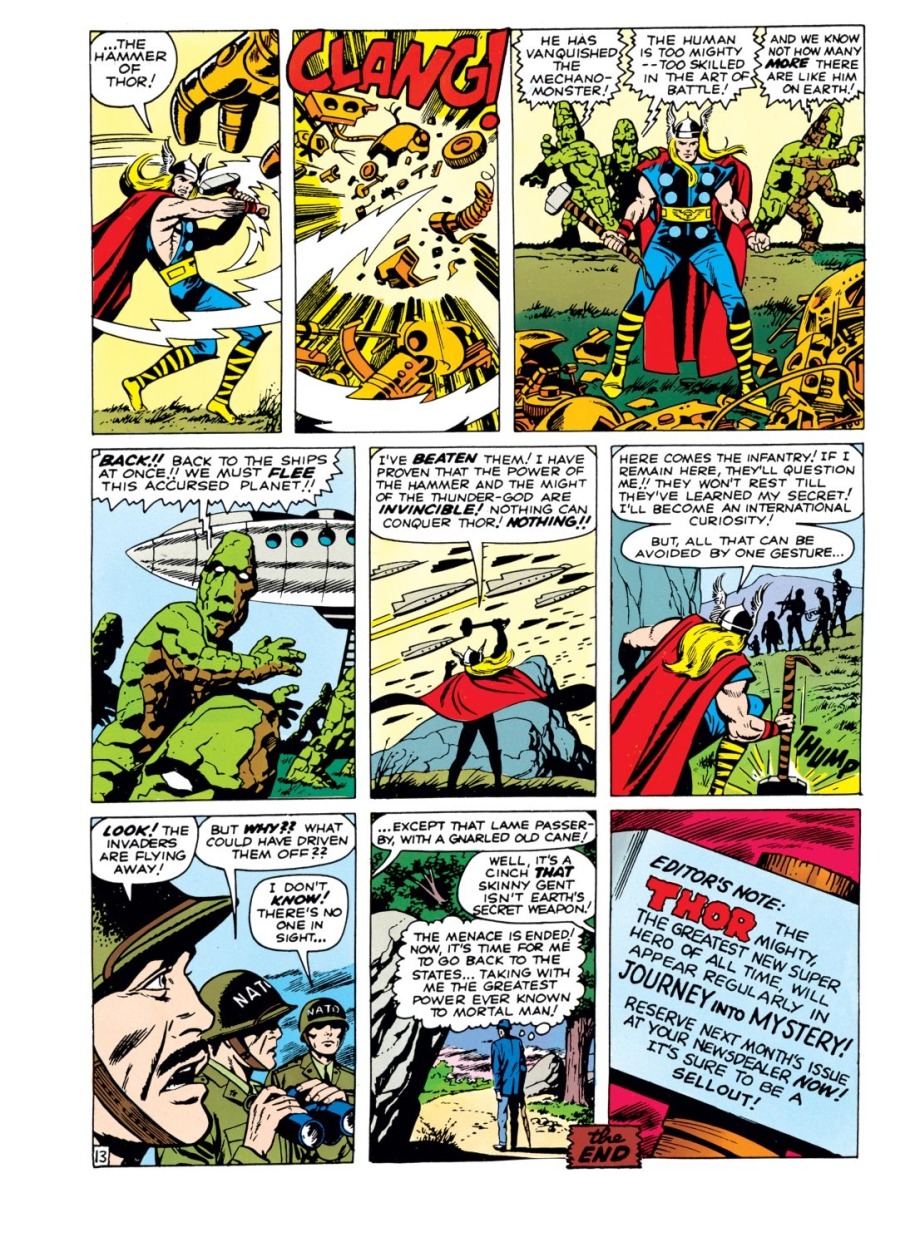 The idea is that Thor is a powerful hero, as powerful as Superman, or the Hulk, or even the entire Fantastic Four, but yet he manages not to be threatening to anyone as a “god” because his consciousness is still controlled by the physician Donald Blake. Eventually, as Lee, Lieber, and Kirby explore the Norse mythology more thoroughly, Blake and Thor develop independent personalities. Still, this Thor was clearly treated as a god of “mythology” and not a god of religion, his were “tales,” and stories, so that the reader saw him as an adventurer. When he became a founding member of the Avengers superhero team in 1964, Thor was easily treated as just another member of yet another superhero team.

Now, over fifty years later, the Blake persona has dropped away entirely, and Thor has been the God of Thunder on many adventures. He’s also ceded his role as the chief protector of humanity and the wielder of Mjolnir to Jane Foster, a human, who took up his mantle when he became Unworthy, and her stories are ongoing, while he struggles to find his place in the universe.

And so Thor, who is something rather more ancient than Stanley and Larry Lieber and Jack Kirby, has found himself in American popular culture, after being part of the Germanic pantheon of deities for at least two millennia. This version of Thor is supporting a globally popular series of movies, which may never have happened without the success of Mr. Fantastic and Spider-Man, so that certainly is to be celebrated. And kernels of the hammer-tossing protector god live on in the stoic long-lived alien of Kenneth Branagh and Taika Waititi as well. If you’ve ever read a comic (or just read from one of the images above), perhaps you’ll see something of the poetry of the ancient Eddic poems… a tale told to entertain, but also to comfort, to educate, to remind the listener that something bigger than us is always going on in the universe, just beyond our grasp, whether that’s the sheer power of thunder and lightning, the neverending cycle of birth, life, death, and rebirth, or more mysteries yet untold.

Or at least, you’ll be able to make that comparison if you’re reading the right comics. Give Thor a shot. It’s usually worth your time.

One comment on “Journey Into Mystery With The Mighty Thor!”