We’ve now learned from Marvel’s presentations at San Diego Comic-Con that the devouring wolf Fenris will be among the foes of Asgard in Thor: Ragnarok. This is appropriate, of course, since Fenris is a key player in the mythological Ragnarok (from Voluspa):

51. O’er the sea from the north | there sails a ship
With the people of Hel, | at the helm stands Loki;
After the wolf | do wild men follow,
And with them the brother | of Byleist goes.

52. Surt fares from the south | with the scourge of branches,
The sun of the battle-gods | shone from his sword;
The crags are sundered, | the giant-women sink,
The dead throng Hel-way, | and heaven is cloven.

53. Now comes to Hlin | yet another hurt,
When Othin fares | to fight with the wolf,
And Beli’s fair slayer | seeks out Surt,
For there must fall | the joy of Frigg.

54. Then comes Sigfather’s | mighty son,
Vithar, to fight | with the foaming wolf;
In the giant’s son | does he thrust his sword
Full to the heart: | his father is avenged.

Fenris has played a part in several stories in Thor comics, and in a few other Marvel comics, but he’s mostly been a figure in Ragnarok stories (there have been several), and mostly in roles that resemble his role as the vanguard of his father Loki’s army and as the devourer of Odin.

Below I’ve shared* Fenris’s introduction into Marvel Comics in Journey Into Mystery #114 from 1965*, in the “Tales of Asgard” feature separate from the ongoing Thor feature story. You may have some questions afterward, especially since this tale will look very, very familiar to you, so I’ve written a few lines below the bottom-most image. 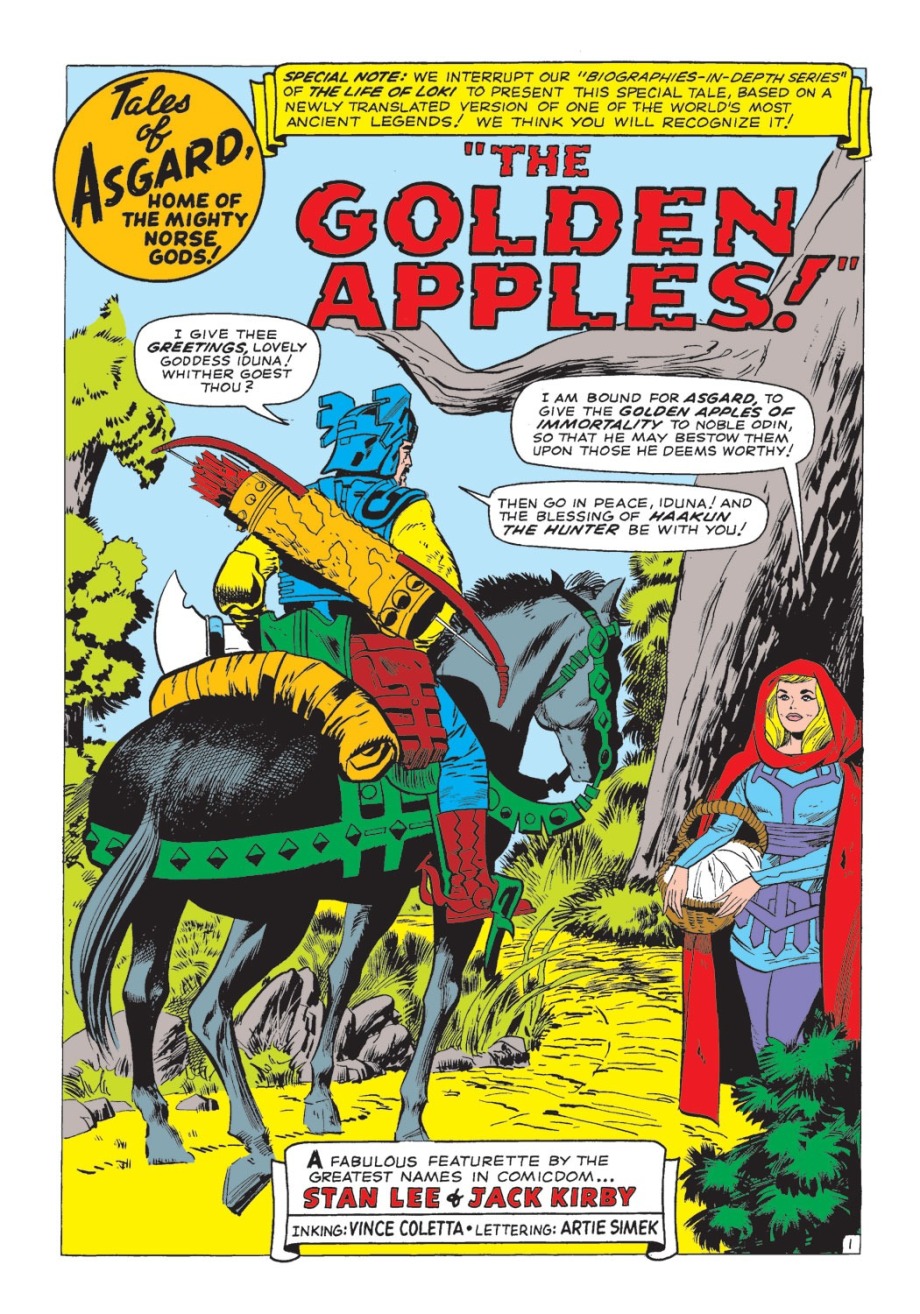 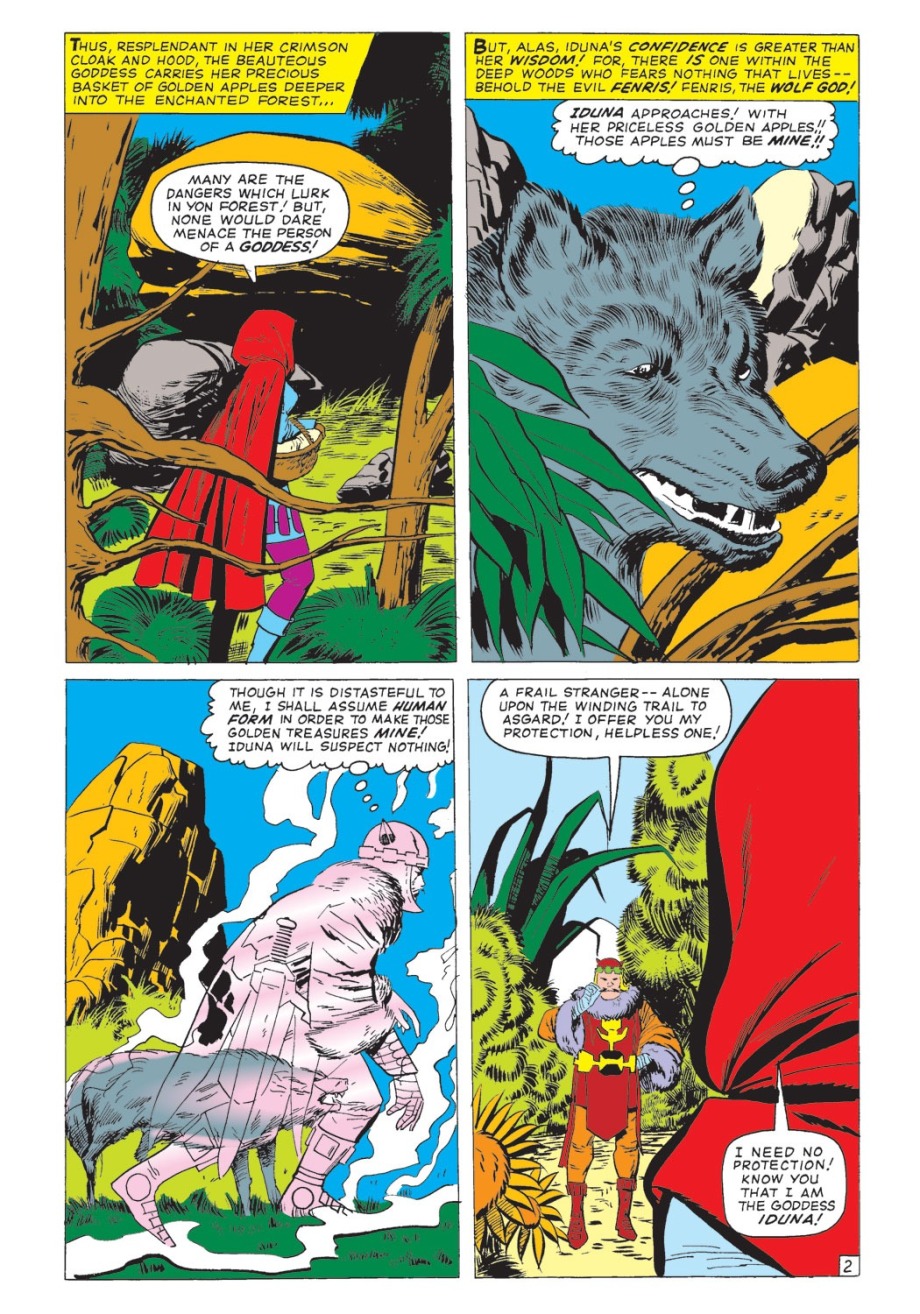 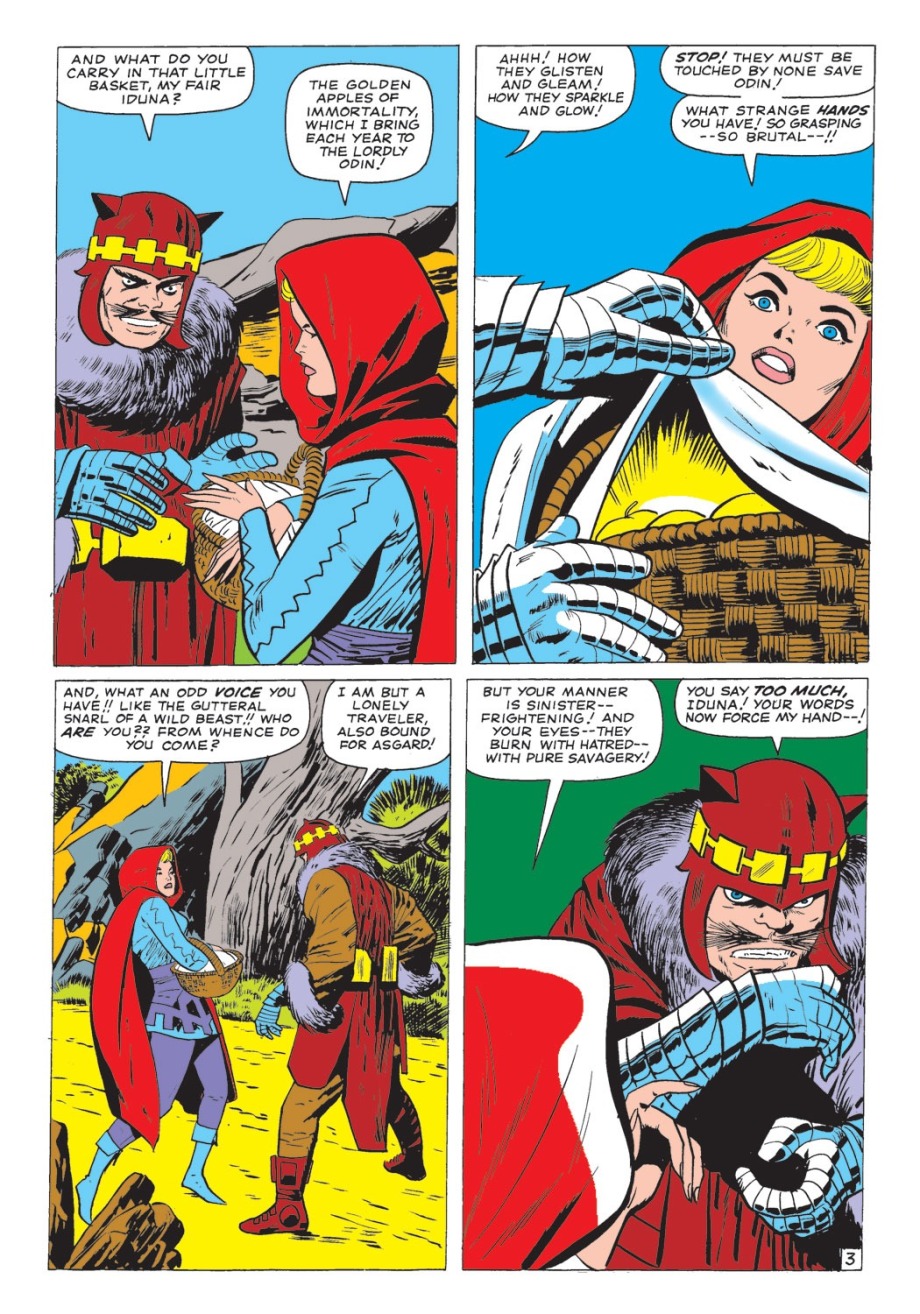 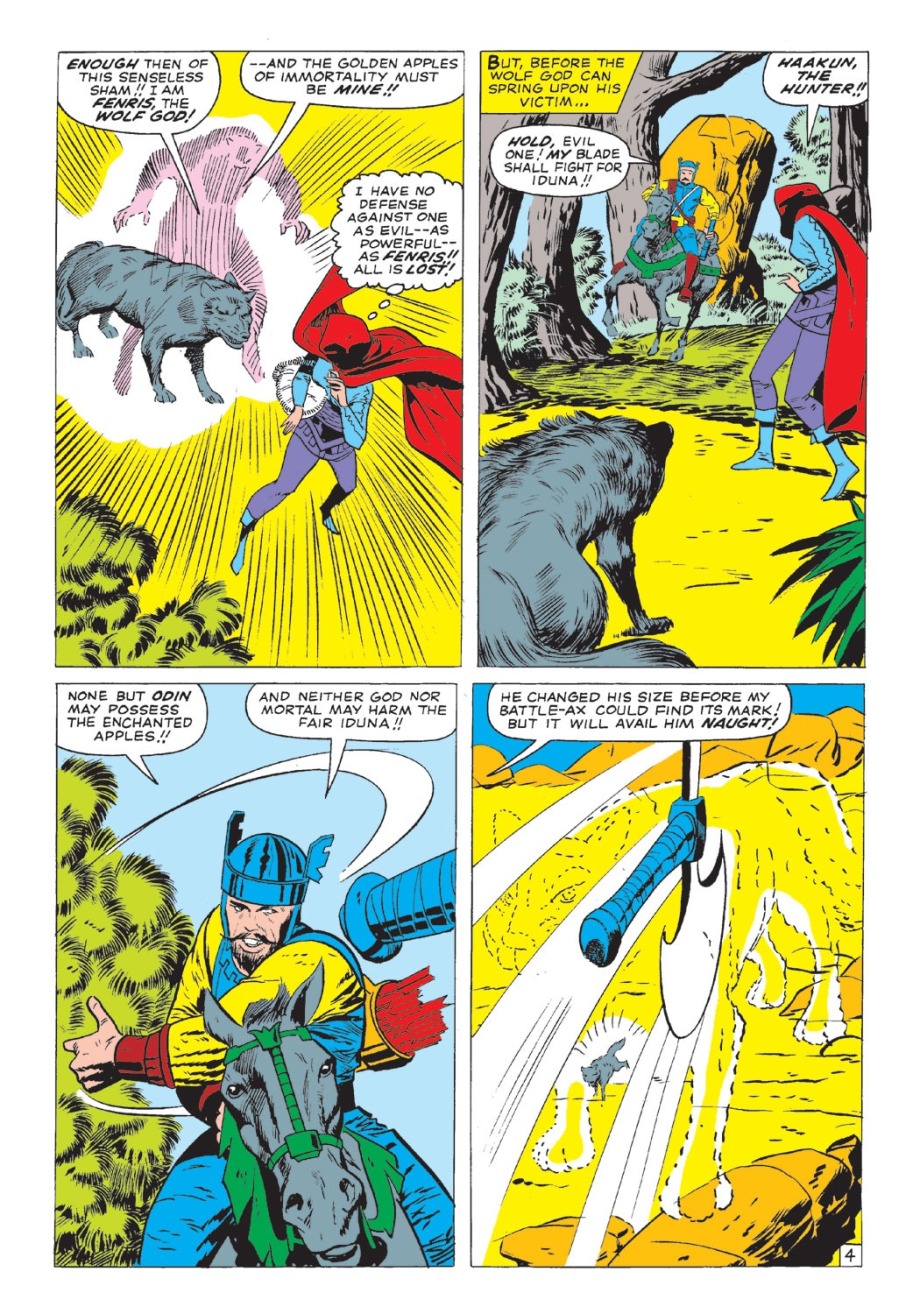 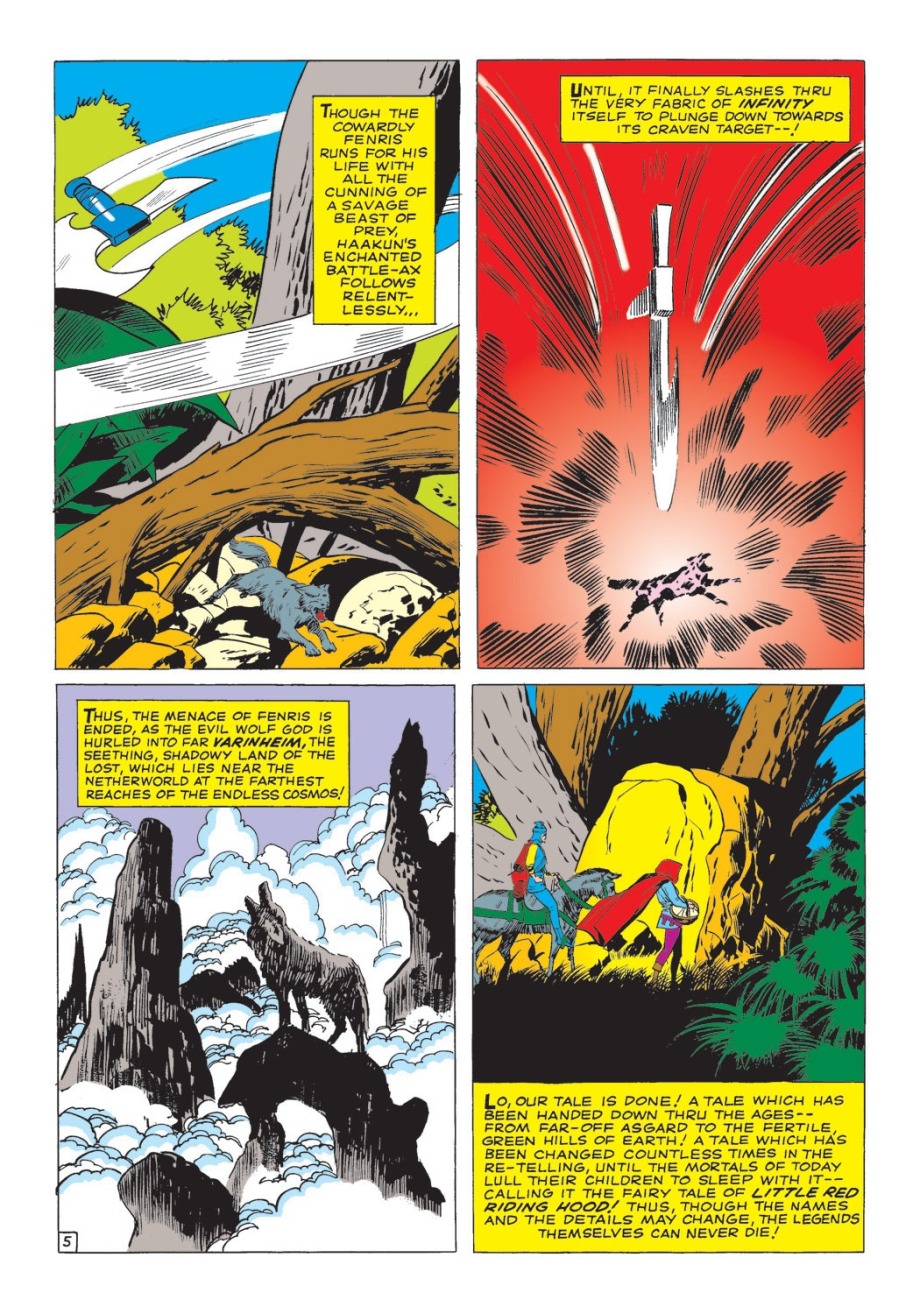 So as the story says at the end, this encounter between Fenris and the goddess Iduna is the foundation of the story of Little Red Riding Hood.

Except it’s not. There is no truth to that statement whatsoever.

And the magical transformation of Fenris into a man, or into a tiny wolf, is something that only ever happens in Marvel Comics. There is no evidence that supports this coming from mythological sources. Also, there’s no place anywhere other than this story called “Varinheim”.

Having spent the past couple of weeks reading through these early comics, and getting re-acquainted with the “Tales of Asgard” feature, I can confirm that this is generally the way these stories go. Lee and/or Kirby take a key mythological figure or place or story and then do whatever they think sounds compelling with it. Of course, since they’re building up a world for Thor’s comic book series, hopefully to last for years to come, they’re entitled to the artistic license to do that. They’re usually good stories, told compellingly. But little fibs to make it sound like these are the original tales from ancient Germanic myth and legend are maybe not the best way to promote these stories.

They’re always fun reading, though. Hope you enjoyed this one.

* Please note that Marvel owns the copyrights for these works and these scans have been shared for education purposes only. Support Thor by checking out the link to the digital comic at Marvel Unlimited above, or there’s a good paperback edition out right now that includes this issue.