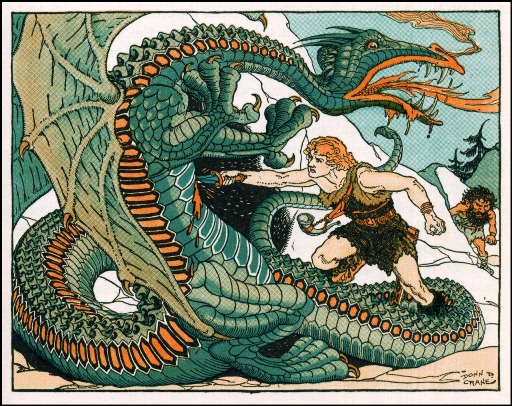 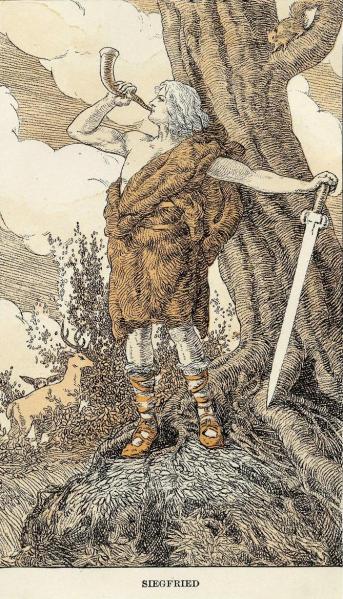 Sigurd, also known as Siegfried, is the slayer of the dragon Fafnir, a great hero of Germanic myth, a member of the eponymous family of the Saga of the Volsungs, and (as Siegfried) one of the stars of Richard Wagner’s famous Ring Cycle. There are many tales and relationships and adaptations and analyses to make about Sigurd and his role in myth; we’ll start today with his slaying of Fafnir, and branch out from there in future posts.

Sigurd was the son of Sigmund, a great and wise king. King Sigmund and another King, Lyngvi, had both pursued a young, beautiful princess named Hjordis, daughter of King Eylimi. In the end, Hjordis chose Sigmund over Lyngvi despite his advanced age, because of his age and renown. Lyngvi, infuriated, mustered an army and lay siege to Sigmund and his lands. Eventually Sigmund fell, but Hjordis was already pregnant, and she found refuge with King Alf, leader of a band of Vikings who had been nearby when Sigmund fell.

In King Alf’s court, Sigurd was raised by a man named Regin, son of Hreidmar, and taught in all the skills and traditions of the high-born. As Sigurd approached manhood, Regin pointed out to Sigurd that his situation had resulted in very little wealth of his own, and Regin was aware of a hoard of gold that would help him build his own home. The quest to get this treasure would result in much glory!

Regin went on to explain that the treasure was guarded by a dragon called Fafnir. Fafnir was once a man, and the oldest son of Hreidmar – Regin’s father. Hreidmar had once been a wealthy fisherman, who succeeded because of his ability to change shapes to an otter. But one day the gods, Odin, Loki, and Hoenir had come across Hreidmar’s son Otr in the form of an otter, and killed him. Hreidmar and Fafnir convinced the gods to compensate them for the loss of Otr, but the dwarf, Andvari, who helped supply the gold was unhappy with his part in the transaction, and cursed the gold so that the treasure would be the death of whoever owned it.

And so Hreidmar died, and Fafnir transformed into a foul dragon, leaving his horde only for food and water.

Regin convinced Sigurd to help him retrieve the treasure from his crazed, shape-shifted brother. Sigurd first consulted a seer, who told him of the tasks he must perform, and afterwards told Regin that he would help him with the treasure, but that first he must avenge his father’s death.

Sigurd then tried to find an adequate sword but could not. He tried to have Regin forge a new sword capable of withstanding his mighty blows, but those swords failed as well. He then had Regin re-forge the sword Gram, a powerful sword passed down through the Volsungs. This time, the sword was right.

Sigurd went to the lands of his enemy King Lyngvi, accompanied by all those in King Alf’s lands who knew him and supported his cause. They quickly took Lyngvi’s lands, and Sigurd personally slayed Lyngvi with the re-made sword Gram once owned by his father. 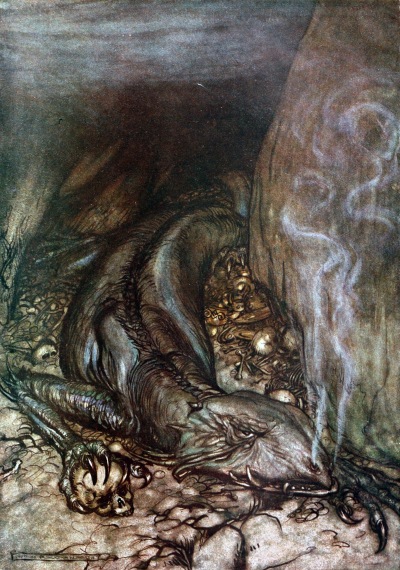 Upon his return, he went with Regin to scout the dragon’s territory.

The dragon walked every day from the cave where the treasure was kept to a nearby pond for water. But Sigurd saw that this dragon was much larger than any man, and that this would be no easy task. Regin recommended that Sigurd should lay a trap for Fafnir: rather than face him in open combat, dig a hole and strike the dragon under the shoulder as he passes the hole rather than risk the poison and anger of a dragon who sees him clearly.

Sigurd agreed, but as he was digging this hole, grew worried that he had made a different kind of trap – one for himself. But a passing stranger, with wide-brimmed hat and long, gray beard, pointed out that if he made several holes, Sigurd would be able to stab from one hole and the poison and blood of the dragon could spill out elsewhere, improving Sigurd’s odds of survival. This was likely the second time Odin himself had come to visit Sigurd, one of many he showed favor to the Volsung family.

The battle went as hoped: Fafnir, even more malignant than imagined, with a foul, acrid stench and covered in grime and dripping poison from his mouth, walked right over the trap Sigurd had made. Sigurd struck, and the wound was fatal.

Fafnir lived long enough after the blow to speak to Sigurd, and the dying beast asked his murderer’s name. He knew, though, that it was his brother who was behind his death. He advised Sigurd to take his horse and ride far from the treasure, for it would be his death.

Regin arrived shortly after Fafnir died. Sigurd cut out the dragon’s heart, apparently a tradition, and Regin drank of his blood. At Regin’s request, Sigurd went to cook the heart so that they might make a meal of it. But he tasted of the dragon’s blood and found himself with new powers: the ability to understand the language of animals, and especially that of the birds who were flittering about nearby, talking to one another about all that they had seen. Sigurd learned that Regin intended to kill Sigurd so that he wouldn’t have to share his shiny treasure, and that the only way to survive was to kill his foster father.

And this Sigurd did, cutting off Regin’s head. He then ate part of Fafnir’s heart, saving the rest for later. He went to the dragon’s lair and loaded his newfound riches into two trunks, and set off for further adventures.

I’ve previously discussed two tales of dragon-slaying here. The first, most obvious tale, is that of Thor’s apocalyptic battle with Jormungand. At the outbreak of Ragnarök, the lightning-lord and the serpent of the seas go to war with one another to finally decide which is the master of the other, the warrior god who protects gods and humans, or the seabeast circumnavigating the world, drawing the line between order and chaos. Both die. The barrier to chaos is broken, and the destructive forces of nature come spilling onto the field of battle, and Surt’s flames consume all the cosmos. The slaying of the dragon is the end, but it’s also the beginning. A few gods survive, and humanity and other forms of life survive to rebuild on the ashes of Ragnarök.

The battle between Beowulf and the dragon in the second half of that famous poem, while not so epic, has similar themes to Thor’s battle with Jormungand. Beowulf battles a terrifying flying monster that encroaches on the borders of his land, threatening to consume everything. He fights the beast in one-on-one combat, and eventually wins out, but only after taking a mortal wound. He dies knowing he has saved his people, but his successor Wiglaf must deal with a very real threat: surrounding kingdoms will be well aware that Beowulf the king has died, and that his people have been severely harmed by the dragon. A different, less cosmic kind of Ragnarök waits for Wiglaf and his people, but it’s quite similar thematically. Everything ends, and no one can keep away the chaos forever, but the cyclical nature of life makes hope (in this story, in the form of Wiglaf; in the Ragnarök tale, in the form of the surviving gods and humans; in the physical world, the yearly spring, and in children and the next generation) something that we can always count on, there is always something new right around the corner. 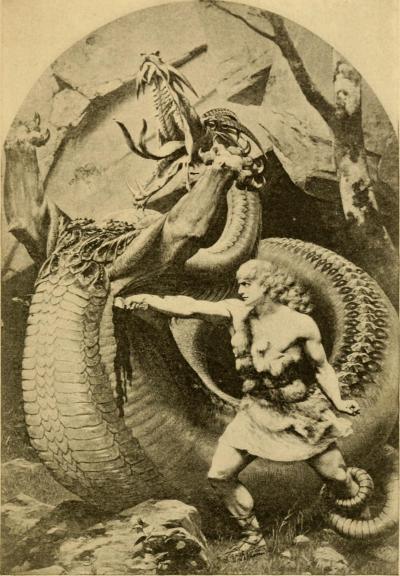 In a way this is just the beginning of Sigurd’s tale, so the apocalyptic implications of the battles of Thor and Beowulf don’t apply to his story. That’s not to say there aren’t similarities, of course. The dragon Fafnir is quite similar to the dragon hoarding gold in Beowulf’s tale, a disgusting, hideous beast with no cares but for self-preservation and gold. And of course, Sigurd’s is a family tale like Beowulf’s, even if Beowulf’s dragon isn’t the monster with the family history: Beowulf has to fight the mother of the monster Grendel before the Danes are truly safe. In Sigurd’s tale, his foster-father is the dragon’s younger brother.

But similarities beyond this point are more cosmetic. Sigurd isn’t defending his homeland from the dragon; he’s going on an errand for Regin, his foster-father. He doesn’t kill the dragon in open battle, but rather in a surprise attack from beneath. He has an extended conversation with the dragon, befitting the fact that the dragon was once fully human. And after gaining superhuman powers from a taste of the dragon’s blood, he kills Regin because he learns that Regin wanted the gold only to himself and was ready to kill to ensure that was the case.

Instead of being a Thor-style defender of the homeland like Thor or the later Beowulf, Sigurd is an adventurer, an active participant. He is much more like the classical definition of the hero than Thor, finding glory in battle, performing deeds of greatness (we still have some of those to get to in future posts), and earning a reputation for courage. Of course, Sigurd wasn’t a god, or a demi-god, or any such incredible thing. He was just a man, determined to live up to his similarly heroic father, and destined, perhaps, by descending from the great King Volsung to make a name for himself in legend.

But having accomplished so much, so soon after coming of age, would Sigurd be able to make a name for himself not only as a hero, but as a husband, father, or king? One needs more than just skill with a sword to achieve those things, but wisdom as well: Beowulf proved himself wise, a good leader who upheld alliances and kept his people safe.

We’ll talk more about Sigurd’s adulthood soon. He maybe doesn’t do so well as you’d hope.

If you’d like, you can read the story for yourself.

The entirety of the Volsung Saga is available here, broken down into chapters so you can skip to the parts you’re most interested in. These are the parts about Sigurd and the slaying of Fafnir (and Regin).

5 comments on “Sigurd the Dragonslayer”