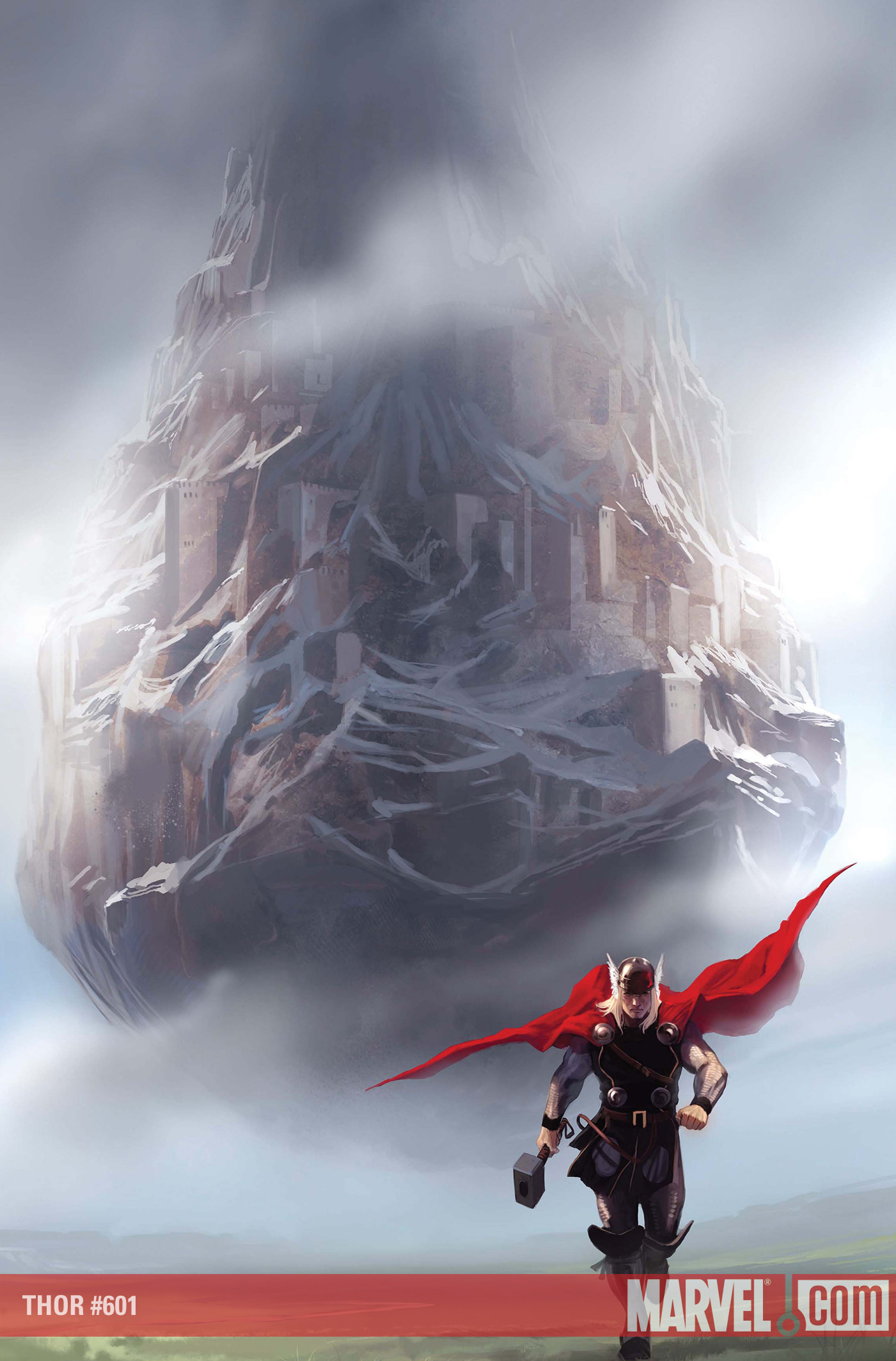 In the poem Grimnismal of the Poetic Edda, as a disguised Odin recovers during a break from being tortured via fire (read the details!), he imparts his knowledge of the gods and the cosmos to the son of his torturer. The very first home he mentions in a list of such places is the home of Thor:

4. The land is holy | that lies hard by
The gods and the elves together;
And Thor shall ever | in Thrudheim dwell,
Till the gods to destruction go.

Perhaps Thor sprang to mind because Odin hoped the gods’ protector would come to save him from his torture. Perhaps there was another reason.

The name Thrudheim means strength-world or land of might. Of note, Snorri also mentions Thor’s home in the Prose Edda, in the story Gylfaginning, but he calls it Thrudvangar, the strength fields. But in another part of his account he does use the name Thrudheim, as an alternative place-name for Thrace, yes, the region at the border of Greece, Bulgaria, and Turkey that you associate with ancient history – Snorri was attempting to call the Norse gods kings who had fled Troy and Thrace to come to the North and were so great that they were later called gods. It’s difficult to say exactly what the difference might be in function between Thrudheim and Thrudvangar, if the latter was a term ever used by the pre-Christian Germanic peoples, though it’s worth pointing out that Folkvangr is a “field of the host” ruled over by Freyja, and mentioned in Grimnismal. Freyja had an important function in selecting the dead from the battlefield, and so her home in Asgard makes sense as a place for some of those she chose. Might Thor have some poorly attributed association with the dead that Snorri is alluding to here?

Snorri also mentions more specifically the name of Thor’s hall, and cites another stanza of Grimnismal:

24. Five hundred rooms | and forty there are
I ween, in Bilskirnir built;
Of all the homes | whose roofs I beheld,
My son’s the greatest meseemed.

And so Thor lives in the greatest of all halls in Asgard, a place called Bilskirnir, with 540 rooms. We’ve talked about the possible significance of the number 540 in this poem before, but I won’t belabor that point here. Instead, let’s go from the reference to Bilskirnir in Stanza 24 to the description of Valhöll in Stanza 23:

23. Five hundred doors | and forty there are,
I ween, in Valhöll’s walls;
Eight hundred fighters | through one door fare
When to war with the wolf they go.

You’ll recognize “the war with the wolf” as Ragnarök, of course. Those “fighters” at Vallhöll are the einherjar, the nobles, berserkers, and other elite warriors who Odin selects from the battlefields of Midgard to serve him again at the final battlefield. Not every warrior who dies in battle goes to Valhalla, only those who have a special relationship with Odin.

Stanzas 25 and 26 go back to describing Valhöll, which makes the close association with Bilskirnir even more interesting; it cannot be said that stanza 24 is about anything other than a hall of Thor’s, or one of Odin’s sons’, at any rate. Between stanzas 4 and 24, Odin goes through an extensive list of homelands of the gods, explaining who lives in each with brief descriptions of each place.

We might also say that in these stanzas contrasts are made between each god and the kinds of ways we might worship him or her by the distinctions in the homes; we’re given instructions for what kind of person best fits with the description of the responsibilities and moral character required of each god and his or her followers.

We’ve already talked a bit about the pre-Christian Germanic peoples’ beliefs about death and the afterlife, but there’s a lot more to the story, and it would take a much, much longer blog post to get in to it all here. But if we accept that Odin only takes a tiny fraction of warriors with him, and maybe Freyja’s only taking warriors with her (but this seems a bit confused), where do the rest go? The most obvious answer is Hel, not quite a synonym for Niflehel, not quite a synonym for Nifleheim. Our sketchy understanding of this place indicates that it is physically beneath the Earth/Midgard, and that most of the dead end up there, including heroic figures like Brynhild and the god Balder. Snorri associates it with a place for evil people, but he badly confuses different place-names related to Hel and may also be confusing the pagan afterlife traditions with punitive Christian traditions.

Surely there are other ways to lead a good life than through a warrior’s existence, though. Surely in the battle of good versus evil, of creation versus destruction, there is something to be said for roles in society other than the very specific types of warriors Odin calls to his side to battle Fenris and Loki.

We’ve known for quite some time now that the pre-Christian Germanic peoples were not warring hordes of savages who prized battle above all other things. The Vikings themselves weren’t like that, and not everyone who lived during the Viking Age lived in a community that sent ships in search of trade or treasure. Many communities were at peace with their neighbors for decades and even centuries. But they all recognized that survival was a struggle requiring adherence to the moral principles exemplified in the stories passed down in the Eddas, sagas, and other stories that haven’t reached us.

What of these people?

Since the myths have substantial implications for an ethical system, involving principles ranging from oath keeping to justice to hospitality to moderation in food and drink, and we can also see from the Norse cosmology and cosmography (where all the gods and major forces of life and death live) that certain parts of the Norse universe were for certain beings who had different characteristics. The gods have a specific place where they hang out, and there are areas within that place set aside for the major gods. There’s a land of the living, and a land of the dead. There’s a cold place and a hot place, and if you go too far towards either, bad things happen.

Because the Norse/Germanic ethical world-view maps relatively closely onto the gods and forces, we can associate them with these places in the cosmology/cosmography. We already know that kings, jarls, berserkers, and so on, have a special place in Asgard to fight each other continuously until Ragnarök. There’s a reserved place for the dead that Freyja oversees, though the qualifications to enter that place are sketchy.

And we have evidence, as introduced above, that Thor’s home might be a place where some population of the dead hang out until Ragnarök. Bilskirnir is very similar to Valhöll. Snorri describes it with the same language as Freyja’s Folkvang.

This is a sketch. Not deeply detailed. But let’s go one more step: who might go to Thrudheim when they die?

If we assume that the only humans who end up in Asgard are those who die in battle, then of course it’ll be a subset of warriors. Odin gets his group of rulers and magic-users, Freyja gets somebody, apparently half? and Thor would pick up strong warriors who weren’t already associated with Odin, but also those warriors who fell in battle defending their homes, or in some other way exemplified Thor’s status as a warrior god.

But what if it had more to do with social class in general? Odin is associated with sovereignty, Thor with warriors and the middle social class in general, and Freyja with fertility, agriculture, and so on. Perhaps Odin keeps the kings, Thor most of the warriors (who are taken from the people themselves), and Freyja the non-warriors. People who associate themselves with other gods may end up in the homes of that god or figure.

And it’s worth noting that there is very little reason to believe that anything like the Christian dualism of good people going to heaven and bad people going to Hell is evident from myth or history. There is far more evidence of ancestor worship and belief that parts of the spirit stayed near loved ones for years to come, that death was far more complicated than a united soul that had any one destination, or that anything like a literal war at the end of the universe was on its way. Ragnarök, like most things, was a metaphor for part of the cycle of birth, life, death, and rebirth, and death, and remembrance of the dead, was part of that same process.

But the confusion among Hel, Nifleheim, and Niflehel, extends also to Valhalla and Folkvang and, if we accept that Thor may have had a role in housing the dead who were associated with his archetype, Bilskirnir and Thrudheim will get included in that confusion as well. We don’t have a straightforward understanding of what the pre-Christian Germanic peoples thought of the afterlife. We have some idea that they had a complex understanding of the self and the “soul”, and that they believed themselves and the gods part of nature, not apart from nature. Trying to simplify those beliefs to a simple system where a person who strove to model his life after the morality of Thor ended up in Thrudheim is untenable. And we’ve not even started on funeral rituals yet.

So Thor’s mailing address is Bilskirnir, Thrudheim, Asgard. It’s near Alfheim and Thor has to cross a couple of rivers to get to Jotunheim. Maybe I should have led with that. You could try to travel there without dying, but I don’t recommend it. Otherwise, try to live the life exemplified by Thor, and at least you’ve got a shot. You don’t have to throw a hammer or anything: just treat others with respect, stand up for those who need protecting, especially your family and friends, and if battle comes, stand up and fight without fear.

This is another post where my status as a non-expert is crucial. I’m trying to come to conclusions based on the work of experts and primary texts, but I’m drawing conclusions that may be disputed or conclusively disproven in texts I’ve just not gotten to yet. That said, this post is inspired in part by a line from Karl Seigfried, “Thor gathers the dead from the peasant or farming class, the part of society he is especially connected to as the god who brings rain for crops and defends the common person from the giants, symbols of the terrifying forces of nature.” I’ve tried to understand that line without going directly to Dr. Seigfried for explanation, though I may do that in the future.